As part of the Open House Chicago 2018 event, I discovered the American Toby Jug Museum. I had no idea what a Toby Jug was and learned that:

A Toby Jug is a figural ceramic pitcher modeled in the form of a popular character, historical, fictional or generic. It can be a person or animal. The original Tobies date back to the 1760’s. The first Tobies, made in the form of a seated jovial, stout man dressed in the attire of the period, wearing a tri-corn hat, puffing on a pipe and holding a mug of ale (stingo), are referred to as “Ordinary Tobies.” The tricorn hat forms a pouring spout and a handle is attached to the rear. Many derivations of the original Toby Jug have evolved over two and one-half centuries, most notably into the Character Jug. Mullins, 2006)

The museum’s collection consists of thousands of jugs, mugs and even umbrella stands in the shape of people, animals, fish, birds and more. They’re charming with a dash of kitsch. 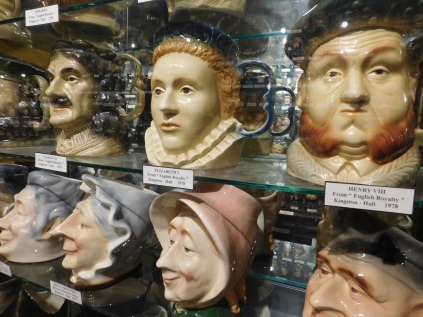 Steven Mullins became an avid collector aver getting introduced to Toby jugs while at summer camp. Currently there are over 8,000 items in the museum including jugs that look like royalty, Shakespearean characters, the Beatles, scientists, U.S. Presidents, cartoon characters, athletes, mythical figures, dictators, etc. I’m so glad that Open House Chicago 2018 helped me discover these jugs.

The museum is open Weds – Friday and the first and third Saturday of the month. It’s a block north of the Main St. CTA station and there’s metered street parking.